Unemployment Rate at 14.7% could have been Worse

It could have been worse. I thought it would be worse. Next month’s figure will probably be worse. I’m speaking of April’s U.S. seasonally adjusted (SA) unemployment rate, as calculated by the Bureau of Labor Statistics (BLS). It came in at 14.7%, after being just 4.4% in March. 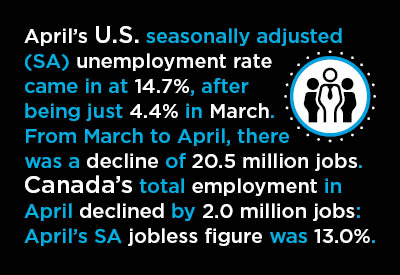 If you’re looking for a figure that’s jaw-dropping, turn to the total number of jobs in the country. From March to April, there was a decline of 20.5 million.

There’s been foreshadowing of bad news to come on the month-to-month employment front from the weekly ‘initial jobless claims’ results. During the past seven weeks, 33 million Americans have joined the ranks of first-time (in this cycle) unemployment insurance seekers.

April’s monthly labor force survey was carried out in the middle of the month. Therefore, it doesn’t include the staffing cutbacks that have occurred since then. The latest two weeks of initial jobless claims have summed to 7.0 million.

Construction’s not seasonally adjusted (NSA) unemployment rate soared in the latest month to 16.6%. In April of 2019, it had been 4.7%.

Surface appearances notwithstanding, the construction sector – from a maintaining-employment point of view – was relatively fortunate in April. It continued to be treated as ‘essential’ under almost all state government work-or-not-work (i.e., ‘shelter at home’) directives.

Construction’s unemployment woes pale compared with those of the ‘leisure and hospitality’ sector, where April’s jobless rate was a mindboggling 39.3%. That’s more than a third of workers in the hospitality and restaurant/bar business being sidelined. Most, but not all of them, are from a younger-leaning age cohort of the labor force.

Why the surprise expressed concerning health services jobs? One might easily assume that with all the medical attention being paid to coronavirus patients, the health care industry would be (unwillingly) thriving. What such an assumption overlooks, though, is that all manner of elective surgery (heart, cancer, etc.), with the accompanying fees that pay hospital bills, is being postponed indefinitely.

Canada’s total employment in April declined by 2.0 million jobs, according to Statistics Canada. On a per capita basis (i.e., the population of the U.S. is nine times Canada’s), that’s a month-to-month jobs shrinkage about on a par with America’s.

Also noteworthy is that 1.9 million of the 2.0 million Canadian jobs-loss in the latest month was in the private sector. The public sector rollback was a comparatively miniscule -77,000 jobs.

Queen’s Park, the provincial seat of government in Ontario, first allowed construction activity to continue, then revoked the privilege. (Now, in May, Ontario construction work is a ‘go’ again.)

The latest data points are for April 2020.
"Year over year" is the monthly figure versus the same month of the previous year.
Data sources (seasonally adjusted): Statistics Canada and U.S. Bureau of Labor Statistics.
Chart: ConstructConnect.

For the province of Newfoundland and Labrador, this is a ‘heady’ moment. It no longer has the highest unemployment rate in the land. Its 16.0% rate is second to Quebec’s 17.0%.

Presently, there isn’t a single province with an unemployment rate below a double-digit percentage.

One final note concerning the Canadian economy is warranted. Canada Mortgage and Housing Corporation (CMHC)’s latest housing starts figures have just been published and in April, they were 166,000 units seasonally adjusted and annualized (SAAR). In most months during the past decade, they’ve hovered in close proximity to 200,000 units SAAR.

OAKVILLE, ONT. -Wolseley Canada has announced the grand opening of its newest br...

TORONTO — Support Ontario Youth (SOY), a group sponsor in the construction and i...