Apprenticeship registration down across Canada: StatsCan

Statistics Canada has released the most recent numbers for apprenticeship, revealing registration has declined in every province and territory.

The numbers have construction industry stakeholders concerned, reiterating the message that significant changes need to be made to fill the looming skills gap.

“I’m not surprised by a drop in new registrations because we knew that we were facing some challenges with apprenticeship, particularly in Alberta and Newfoundland with the price of oil dropping,” said Sarah Watts-Rynard, executive director of the Canadian Apprenticeship Forum. “Obviously it’s disappointing to see numbers drop so substantially.

“This is the first time we’ve seen registrations down in every province across the whole country which is maybe more troubling because it doesn’t really reflect the kind of demand we’re hearing from industry around the need for skilled tradespeople.”

Colleen Dignam, provincial co-ordinator of training for the Carpenters’ District Council of Ontario, pointed out that carpentry was one of the top three apprentice registrations according to the numbers, but more work needs to be done to attract new apprentices.

“We find the drop in apprenticeship registrations across Canada concerning and we are in need of skilled workers to fill that gap,” said Dignam. “In Ontario, accessing the apprenticeship system for apprentices continues to be a major barrier. There might be more government funded training needed to help apprenticeship numbers increase.

“The other concern that we saw was the slow or limited increase of women in the trades. We see that as something to focus on for the future.”

Watts-Rynard said she is mostly concerned about registered apprentices who may be partway through the program and need employment to achieve certification.

“When registrations are down across the board it tells us that the opportunities for people who are in an apprenticeship already are potentially also finding that it’s hard to find jobs which could mean apprentices aren’t progressing. That gives us a sense that we’re going to see numbers actually drop out completely and go to other fields at a time when we are hearing pretty much from every sector of the economy that they’re having real difficulty filling skilled trades positions,” she explained. “My biggest concern is that I know the economy is cyclical. That demand will come back and I think the industry is going to be looking around saying where are the apprentices and they will not be there.”

She pointed out the numbers are two years old and it’s difficult to say whether or not they reflect the current reality.

“It’s not all rosy everywhere but we’re definitely hearing that things are starting to turn around and there is demand,” said Watts-Rynard. “I imagine by the time we’re looking at 2018 numbers, which won’t be until 2020, we’ll see that there has been a bit of a recovery.”

Don Arseneault, government relations manager for Canada’s Building Trades Unions, said with every challenge there is an opportunity.

“It’s an opportunity for us to get focused on trying to reverse that trend and we understand how we need to do that,” he said.

“We really need to focus on rebuilding, getting new entrants into apprenticeship programs, into skills training programs. If you look at the membership we have today compared to 25 years ago, it has changed. Canada has changed and we have to change with the changing times. Women and trades, new Canadians, Indigenous people, underrepresented groups…we need to attract a lot of people if we’re going to fill that void we’re seeing over the next several years.”

He lauded the current federal government’s commitment to apprenticeship.

“There are a lot of the new initiatives that they brought into their budget in terms of the Women in Construction Fund, incentives for apprenticeship training, completion grants, there are a lot of dollars being invested,” Arseneault explained. “The government is investing in the Trans Mountain pipeline which will create some activity and will create an interest around those types of skilled trades jobs.”

Joe Vaccaro, chair of the Ontario Skilled Trades Alliance, said the key to creating more apprenticeship opportunities is a combination of cutting the red tape to make the process less taxing for employers and fixing the ratios so employers have spots to offer.

“We have been saying for quite some time now that securing an apprenticeship is not an easy thing to do. That’s one of the reasons we’ve been pressing the provincial government to make adjustments and make it easier for apprentices and for employers to create those spots,” he said. “Let’s simplify the process and get the outcome that we want; more people training in apprenticeship so they can walk out a certified tradesperson.”

A fresh approach to attracting a whole new set of people to the skilled trades has been lacking, said Sean Reid, vice-president of member relations for the Progressive Contractors Association of Canada.

“We’ve taken the same old thinking and it has just not achieved any meaningful results. In fact, in many cases we’ve actually lost ground, so the challenge now is to think more boldly and really look at significant new actions, new steps, new ideas to improve our apprenticeship system,” he said.

“We should be thinking about what can we do within our industry to attract non-construction people. In every other industry that is suffering from skills shortages they work on themselves to compete for talent against other industries. We need to do more of that. We need to think about are there systemic challenges in our industry that are a disincentive for people to come and work in the trades? Can we fix those so more non-construction people are considering construction.” 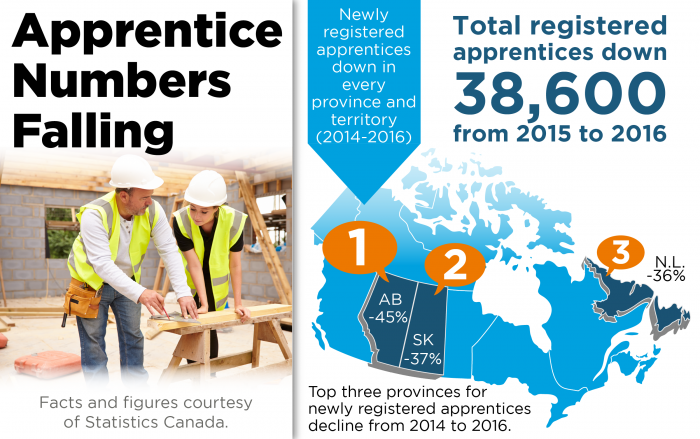 Existing technology designed to be worn by construction workers is teed up and r...

Texas, at Half Speed, Still Leads all States in Total Nonresidential Construction Starts

Texas the Leader, but Accolades for Missouri and Indiana According to Construct...

CALGARY, ALTA. — The Government of Canada and the Federation of Canadian Municip...