Government charges can make up more than 20 per cent of home construction costs in Canada’s largest cities, new data shows.

In B.C., the study examined Vancouver, North Vancouver, Burnaby, Langley. In Ontario they looked at Toronto, Mississauga and Markham. In Quebec they considered Montreal, Brossard and Terrebonne.

Quebec municipalities had the fewest government charges, ranging between four to six on average.

B.C. and Ontario cities averaged seven to nine and nine to 10 government charges, respectively. Municipalities studied within these two regions levied, on average, more than one fee from most government charge sub-types, which include permit fees, municipal fees, warranty fees, development charges and density payments.

Among the different dwelling types studied, single-detached homes saw the fewest government charges, ranging between three and seven. Low- and highrise condominium apartment complexes, conversely, are the subject of the most charges, ranging between five to 10. The disparity between the number of charges for detached homes and low- and highrise condominiums comes from fees on density for the latter.

In Montréal, government charges generally account for the smallest portion of construction costs across all housing types.

The average government charge per square foot in Toronto area municipalities is $86, in Vancouver it’s $70 and in Montreal it’s $24. 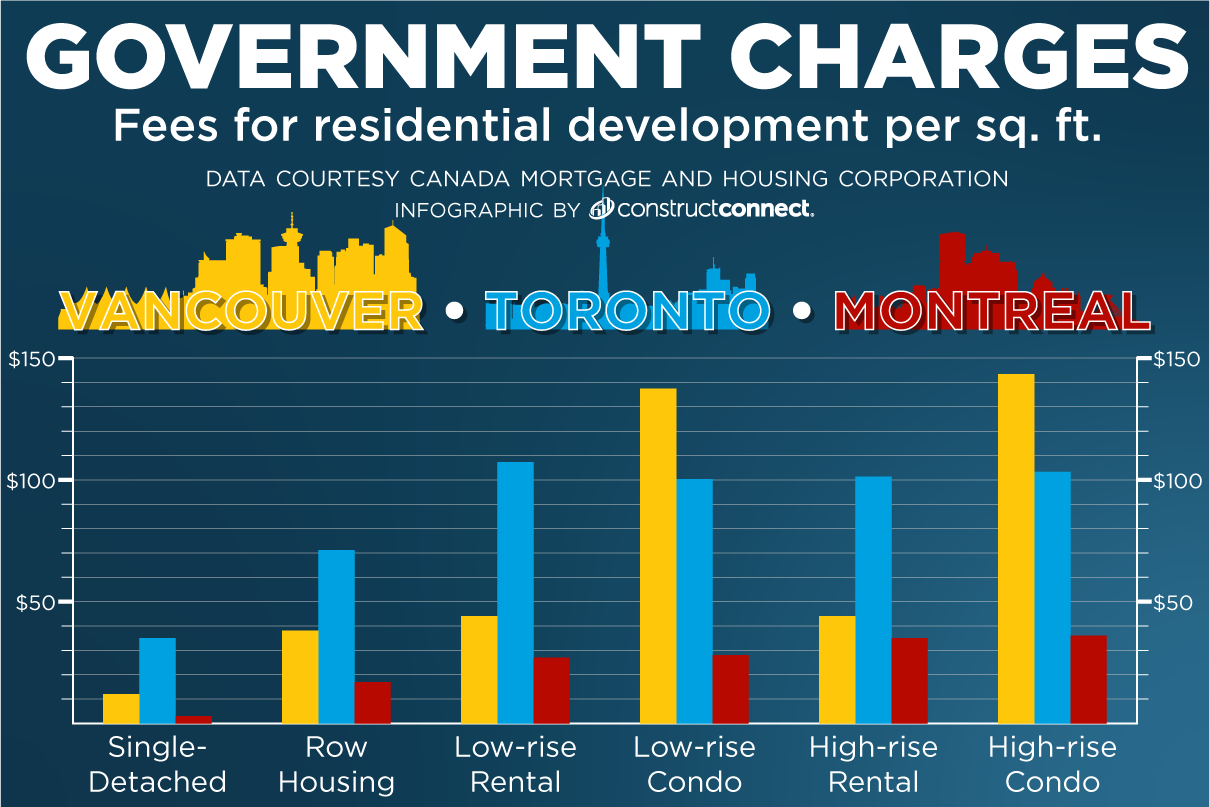 Once a subdivision agreement is registered, the single detached home tends to be the housing type subject to the lowest government fees.

“This seems to run contrary to densification efforts being pursued by municipalities, which are necessary to increase housing supply within existing urban areas,” noted the study.

The impact goes beyond just the dollar amount.

The study added the number, complexity and uncertainty of government charges, particularly when they are subject to negotiation, may lengthen the development approval process and, in turn, the amount of time needed to bring new supply to market.

The study suggested municipalities must work on increasing certainty around the number, timing and magnitude of government fees. Municipalities could also use fees to incentivize more housing by lowering them for denser developments and raising them for less dense ones. The study suggested eliminating spot rezoning which it says adds time and complexity to the process.

The authors also encouraged municipalities to wean themselves off of these fees and explore alternate tools for to raise revenue.

“Housing affordability is a complex, multi-faceted issue,” stated the CMHC. “It can’t be solved with one solution. But we can look at different problems and solutions one at a time to gain a better understanding of the challenges. This can help advance holistic approaches to addressing housing affordability.”

West extension of Ottawa LRT may be delayed one year

An alliance of developers, architects, builders and planners has joined forces t...

MONTREAL — Brivia Group and its partner Olymbec have announced the acquisition o...

CAMBRIDGE, ONT. — The federal government has announced $15 million in funding to...