A working group composed of industry leaders and city officials is recommending sweeping changes to Winnipeg’s road construction process that would improve communication, align the tendering and budget processes and provide flexible working hours in some rare circumstances.

Chris Lorenc, president of the Manitoba Heavy Construction Association and a member of the group, explained that if adopted by City Council, the recommendations would create one of the most progressive roadbuilding programs in Canada.

“The combined effect of these streams of recommendation is a shorter construction project period for most if not all projects, likely lower capital costs because you are out of the gate much earlier and you are not reacting to problems related to the interruption of quiet or commerce,” Lorenc said. “Instead, you have anticipated what the problems might be in the design and project management.” 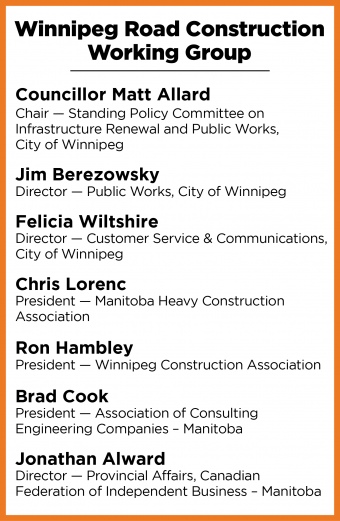 The group’s report has four sections, each with a series of recommendations.

Regarding communication, the working group recommends that engineering consultants engage affected residents and businesses at the preliminary design stage to better plan and stage road projects and minimize impact.

They also are asking the city to notify affected owners and tenants be notified well in advance of forthcoming road projects and for communication methods and timeframes between the City of Winnipeg, contractors, and affected residents and businesses be standardized. Finally, the group is asking that organizations, including the Canadian Federation of Independent Business, the Winnipeg Chamber of Commerce, and the Business Improvements Zones, be leveraged in the communication of large road projects.

Regarding road construction tendering and the city’s budget, the report recommends to two processes be aligned for better planning, greater certainty for contractors and maximizing value for taxpayers. Recommendations to do this include tendering up to 80 per cent of the following year’s road work from November to January, and the balance from January to March, and attempting to award consulting assignments a year prior to construction projects whenever possible.

The group wants to see city officials increase its use of prequalified contractors and Master Service Agreements and adopt qualifications-based selection for complex projects. The group is asking city officials to request that the Province introduce legislation requiring owners of buried infrastructure in the public right of way to register under a single registry, similar to Ontario’s Underground Infrastructure Notification System Act.

Regarding 24/7 construction work as a potential tool to expedite projects, the working group determined to be unsafe and impractical in most cases.

“24/7 construction is not a silver bullet and should be considered on a case-by-case basis and where appropriate,” reads the report. “In many cases, 24/7 construction is simply not practical, given noise related concerns and resource availability. Overnight work safety was also flagged as a concern. However, the Working Group acknowledged extended working days and daylight hours for specific projects would be advantageous, especially during the summer.”

Lorenc added that despite the public interest in longer work hours, it is often not doable.

“This was a hard report to write in part because there has been so much public expectation that we can go 24/7, but that is not a reality in an urban centre or Winnipeg,” said Lorenc. “Aside from limited and extreme circumstances which absolutely require it, it is just not a practical, cost-effective solution.”

“We are very pleased that this mayor invested the political capital and leadership to strike this group so we can have these recommendations,” said Lorenc.

PRINCE GEORGE, B.C. — Crews will start resurfacing roads in and around Prince Ge...

MISSISSAUGA, ONT. — The board of directors of the Surety Association of Canada (...

New Reece Bridge in Niagara Region finished ahead of schedule

WINNIPEG — The Manitoba government has announced it will undertake a major recon...

PCL Construction is putting its modular construction expertise to use in the fig...

WINNIPEG, MAN. — The Government of Manitoba is providing $10 million in grants f...

WINNIPEG — The Manitoba government has announced a new tax increment financing i...