Warming temperatures will devastate Canadian infrastructure across the territories and northern swaths of large provinces, causing billions of dollars in damage to airports, roads and buildings over the next three decades, according to a report by the Canadian Climate Institute.

The report, called Due North: Facing the costs of climate change for northern infrastructure, indicates that in Canada’s North, airport runways are warping, paved roads are cracking and collapsing, and homes and buildings are failing due to permafrost thaw damage and extreme weather.

It is the first analysis to show the extent of the impact and to quantify the cost of climate change for infrastructure across northern Canada. Researchers examined what effect the warming temperatures will have on future viability of winter roads and found half will be unusable in 30 years.

“Infrastructure across the North has been severely under-resourced for decades, and climate change will amplify existing problems with devastating consequences for northerners as it puts their communities, livelihoods, and lives at risk,” says Dylan Clark, senior research associate at the Climate Institute and one of the authors of the 74-page report.

“Because of historic under-investment, there is already an infrastructure gap in the North, and northern communities do not have the same quality of infrastructure as the rest of Canada. When climate change impacts – such as permafrost thaw – are layered on to this existing gap, it causes severe damage to roads, homes and buildings, and airports with devastating consequences for northern communities.” 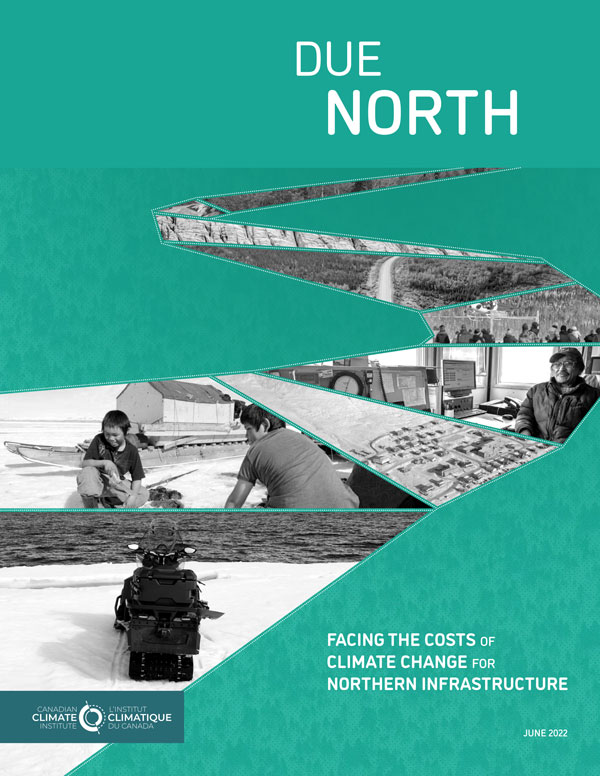 The report is part of a series being done by the Climate Institute, an independent climate policy research organization, to gauge the costs of warming temperatures.

Clark says that when doing research for earlier reports in the series, it became clear that because Canada’s North is warming three times faster than the global average, the impacts of climate change will be even more extreme than in the rest of Canada.

“This combined with an existing infrastructure gap due to decades of under-investment, demonstrated that a standalone report on the North would be an important part of this series,” he explains.

Northern infrastructure is uniquely vulnerable because of colonialism and historic under-investment, as northern communities do not have the same quality of infrastructure as the rest of Canada, says Clark, and because the North is also warming much faster than the global average, climate impacts are more severe.

“Already the warming climate is causing roads and runways to crack, in some cases making them unviable. By mid-century, winter roads, which many northern communities rely on to bring in goods and critical services such as health care, will have disappeared.”

The report calls for existing policies and funding models to be revised so that territorial and Indigenous governments can apply their knowledge, leadership and ingenuity to plan, design, and build infrastructure that meets their needs.

“Urgent federal government action and investment is also required to close the infrastructure gap as territorial and Indigenous governments do not have all of the resources to adapt,” says Clark.

However, he notes, a hurdle is that there is no framework that Indigenous, territorial and federal governments have agreed on to support infrastructure and climate-change adaptation decisions. This impacts funding so that often it is difficult to get appropriate money to address infrastructure deficits.

While the situation is daunting, early and ongoing investments in infrastructure adaptation can substantially reduce costs and protect communities, according to Clark.

For example, early adaptation investments in rebuilding foundations of homes and buildings in the Northwest Territories can reduce damages five-fold over the course of the century, the report found.

Clark says the Climate Institute is continuing to work with northern governments to help assess how climate change will impact the region and develop adaptation policies that reduce risks.

“We are ensuring that decision makers know about our recommendations and findings as they develop regional and national adaptation strategies and plans.”

Canada needs to export more energy to more markets in more parts of the world....

After more than a few years of planning and studies, a $295 million, a three-yea...

Warming temperatures will devastate Canadian infrastructure across the territori...

The British Columbia Institute of Technology (BCIT) is doubling down on building...