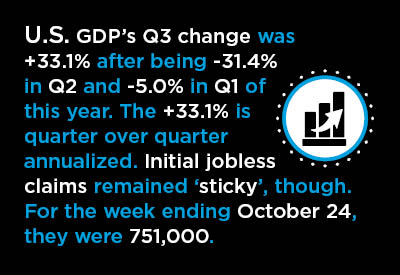 Both results are highlighted in the graphs below. The bigger story is sure to be the outsized increase in GDP and I’ll come to that in a moment.

But first, initial jobless claims remained ‘sticky’. For the week ending October 24, they were 751,000.

They need to fall to around 400,000 before there can be sighs of relief that the economy is truly on the mend.

In the last recovery phase, it was when they moved below 300,000 that optimism reigned once
again.

The +33.1% is quarter over quarter annualized. In other words, it’s the q/q change extended, hypothetically, over a full year.

There’s another way to look at the GDP number that provides a clearer picture.

In Q3 of this year, there was a significant bounce back of GDP, to reach $18.584 trillion.

Some individual line items in the latest GDP report are as follows (and keep in mind that these are all annualized):

There’s a dichotomy in construction activity at the moment, with the homebuilding side seeing an upswing while the nonresidential side remains hunkered down.

Your P3 2020 highlights: Celebrating the present, looking to the future

Canada’s minister of infrastructure and communities has committed to developing...

A panel of union experts discussed their different experiences with Community Be...

BREAKING: ‘Most construction can continue’ as Ontario moves Toronto, Peel Region into lockdown

TORONTO — Ontario is moving the COVID-19 hot spots of Toronto and Peel Region in...

BURNABY, B.C. — TransLink is launching a new round of engagement for a proposed...

PRINCE ALBERT, SASK. — Crews will soon begin construction on an expansion of the...

Surety Corner: How to avoid the dreaded ‘no’

As we head towards 2021, there remains a high degree of economic uncertainty due...

Demolition of an existing medical office is underway to make room for the Linx C...

CAMH marks completion of largest redevelopment phase in its history

TORONTO — The third of four phases of the largest redevelopment in Toronto’s Cen...