Builders and contractors must be at the same table with other professionals from the construction industry such as owners, designers and engineers if Calgary is to successfully achieve its accelerated goal of getting to city-wide net-zero greenhouse gas (GHG) emissions by 2050.

That’s one of the key takeaways from a briefing that was drafted by the Calgary Construction Association (CCA) following a decision by city council to declare a climate emergency and call to action in the city.

“Our industry has a significant role to play,” CCA president and chief operating officer Bill Black explained in an interview. “Constructability is something that you need to think about earlier and what might seem good on paper may not actually work well in reality. Builders may know that whereas others may not.”

Recently, council passed a notice of motion that states the city will become part of the global community taking action on climate change and will make it a strategic priority by pushing the city-wide and corporate GHG emissions target to net-zero within the next 28 years – a marked improvement from the previous target set by the city of an 80-per-cent reduction of 2005 GHG levels by 2050.

Other cities in Canada have already declared climate emergencies, including Edmonton, Vancouver, Toronto, Ottawa, and Montreal. 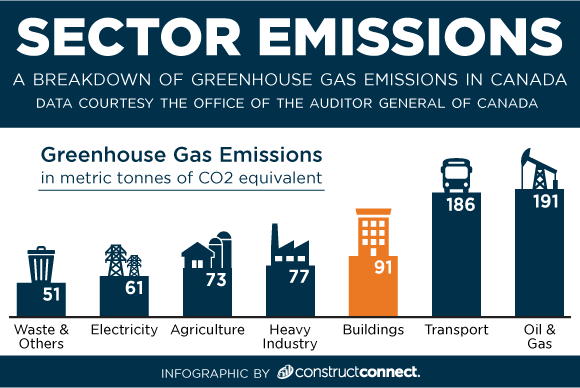 Calgary will develop strategic business plans and budgets across all departments that invest in and accelerate high-priority emissions reduction and climate risk reduction opportunities.

It’s an ambitious goal that may be difficult to achieve. A report last year showed GHG emissions at the city had fallen less than a half a percentage point below 2005 levels and that the city is currently not on track to meet its goal of cutting emissions to 80 per cent of 2005 levels by 2050. The city’s climate goals are further complicated by the fact Calgary continues to grow.

Black said the construction industry has the ability to build more sustainably and can provide both knowledge and expertise, but developers, designers and architects must buy into the program as well.

“What it needs is people to start making the investments and designing with that in mind. We respond to people like owners who want to develop or renovate buildings. We don’t create the buildings, we respond.”

Black said it’s a bold move by city council to address the climate emergency as the legacy of Calgary and Alberta in general has been built around the energy economy which has received a lot of negative press.

“It sets us at the table to really think about it and become accountable and look at meaningful ways to respond.”

The CCA figures the new policy will create more jobs for the construction industry as older buildings would have to be retrofitted and the blueprint could trickle down to the private sector and result in new best practices, codes and standards. It will also put new demands on local industry to build new rail lines and stations.

There is expected to be a learning curve as builders and designers adapt to new practices, said Black. For example, because a big part of the strategy is about reducing energy consumption, changes must be made to building envelopes to prevent massive heat gain or loss.

“You design with different materials and you employ more passive design that uses free cooling from outside air and looks at shading the high-exposure elevations of a building and designing it, so the building isn’t completely dependent on energy-guzzling HVAC systems to compensate.”

Architects and designers will have to use good-quality building systems and materials, and a good business case will have to be made for using the materials, said Black.

Other cities that have embraced a climate declaration have taken a very “holistic” look at the building process.

“An owner can’t just say, ‘I want a green building,’ and it happens overnight,” said Black. “A builder can’t say, ‘We want to build a green building,’ unless somebody else does. It really takes a whole village and that’s the exciting thing because it gives us the opportunity to be sitting at the table with owners and designers and engineers, not just responding to plans and specifications that come across our desk.”

According to Black, most builders are on board with the idea but there is some hesitation about the cost.

“Based on some of the conversations I’ve had, I would say there’s an understandable mix. I don’t think there’s much resistance but I think there’s hesitation in some camps that are like, ‘This is all great, but how do you afford it?’ Because everybody assumes it’s going to cost more and that’s where I think we can actually bring a lot of the value.

“We’re just trying to help our members see that and the opportunity that’s in it. That’s part of our job, to help them understand that, to listen to their questions and concerns or suggestions and find a way to communicate that to the city and others who are trying to implement and respond to their policies.”

EDMONTON, ALTA - A consumers group is arguing that a $31-million fine proposed f...

Industry Perspectives Op-Ed: Does the ‘Nudge Theory’ apply to trades and apprenticeship?

Recently I reacquainted myself with the research report It Pays to Hire an Appre...

By mid-summer, Calgary's construction and demolition industry, looking to dispos...